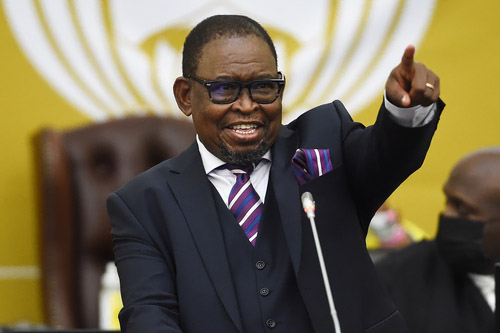 When one weighs up his giving with the one hand and taking with the other, it’s difficult to assess whether South Africans will benefit overall from tax changes announced by Finance Minister Enoch Godongwana in his Budget Speech last week. However, at least he didn’t seek to increase the tax burden on financially-stressed South Africans for the 2022/23 tax year.Story continues below Advertisment

On the relief side, the personal income tax brackets, medical tax credits, rebates and tax thresholds will be adjusted by an “inflation-related” 4.5%. There will be no increase in the fuel levy, as many analysts predicted. However, sin taxes – excise duties on alcohol and tobacco products – will increase by between 5.5% and 6.5%, a more substantial hike. There are also no inflation-linked increases to such things as annual contributions to tax-free savings accounts and exemptions on interest income.

The adjustments to the tax brackets are 4.5%, based on Treasury’s inflation projections of 4.8% this year, dropping to 4.4% next year. But are these projections realistic, considering the steep rise in global inflation over the past few months and the January year-on-year Consumer Price Index inflation figure coming in at 5.7%?

Hannes van den Berg, chief executive at Consult by Momentum, believes that when everything is taken into consideration, the relief may be less than one thinks. “Citizens in general perceive inflation to be much higher than the basket used to measure inflation, and although the government did announce relief in the personal tax scales, I think there is a certain amount of ‘creep’ in there where the full extent of inflation is not going through to consumers. So although the amount going back to consumers is in the billions (see below), it doesn’t fully match real inflation given a forward-looking view. Coupled with that are the lack of inflation-linked adjustments to, say, the maximum deductible retirement fund contributions of R350 000 a year or to the exemptions on interest. Those things, if you take everything into consideration, will result in an overall benefit much lower than the inflation rate,” he says.

Van den Berg also notes that tax concessions for working from home were not really addressed in the Budget. “That’s an added expense that people are incurring,” he says.

In the past, the government has on occasion allowed for a certain amount of bracket creep (also known as “fiscal drag”) by not adjusting the tax brackets. This is advantageous to the government. In this scenario if your salary increases by the inflation rate but the tax brackets remain the same, you end up paying a slightly higher percentage of your salary to the taxman.

So by increasing the brackets by the inflation rate, the percentage of your salary going to the taxman ‒ if it also increases by the inflation rate ‒ will be roughly the same. If you did not receive a salary increase this year ‒ which applies to many employees owing to the adverse economic climate ‒d your income tax will decrease slightly.

In fact, in its 2022 Budget Review document, which accompanied the Minister’s Budget presentation, the government estimates that adjusting the tax brackets will cost it about R13.5 billion in revenue, which translates into money in your pocket.

What is not changing

No mention was made, in Minister Godongwana’s Budget Speech or the accompanying Budget Review document of any changes to the following taxes or exemptions, which will remain at their present levels:

No mention was made in the Budget about a mooted Basic Income Grant for South Africans. Carmen Nel, economist and macro strategist at Matrix Fund Managers, says: “The Budget does not allow for a Basic Income Grant, as the finance minister rightly notes that a structural increase in spending would require a structural increase in revenues, which would mean a personal income tax or VAT rate hike. This would be a notable risk to spending in the medium term, given socio-economic and political pressures.”

However, the Budget has provisioned R44 billion in 2022/23 to continue the special Covid-19 social relief of distress grant (R350 per beneficiary per month) for another 12 months.

The existing social grants will all be increased by 5% except for the foster care grant (1.9% increase) and the child support grant (4.3% increase).

Hannes van den Berg, chief executive at Consult by Momentum, says that while tackling inequality is necessary, it will become increasingly challenging considering that South Africa already spends 3.3% of its GDP on social expenditure. “Social grants are going to 46% of South African citizens! The ruling party is creating a dependency on social grants among their voters – as opposed to creating meaningful employment opportunities,” Van den Berg says.

The Budget re-emphasised the government’s intention to ensure that wealthy South Africans pay Caesar what is due to Caesar. To this end, provisional taxpayers with assets over R50 million will be required to declare specified assets and liabilities at market values in their 2023 tax returns.

In a Cliffe Dekker Hofmeyr presentation on the Budget on Wednesday, Emil Brincker, director and head of the firm’s tax and exchange control practice, pointed out that there was already a heavy tax burden on upper-middle-class and wealthy citizens.

Brincker said that SARS were expecting to collect more from high-net-worth (HNW) individuals, “but I am not sure that will be the case”. He said many of these individuals were emigrating, with SARS ‒ and the country ‒ losing out as a result.

The Budget speech touched on the government’s proposed “two-pot” system for retirement savings, saying more work needed to be done.

Michelle Acton, key account manager at Old Mutual Corporate Consultants, says the fact that the Minister has given the green light to the restructuring of the retirement system for individuals to allow for greater preservation and partial access to funds via the two-pot system is welcome.

“More detail is required in terms of understanding the parameters that would allow for early access. This will need to be provided in the draft legislation that will be published for comment towards the middle of the year,” she says.

Acton says more information on how National Treasury plans to tax contributions is also critical to reform. “Our current retirement fund tax dispensation is a significant incentive to encourage retirement savings, so we do not believe that this should be amended due to the proposed two-pot system.”

A change welcomed by the investment industry was the “harmonisation” of offshore investment limits across investment products.

Andrew Davison, head of advice at Old Mutual Corporate Consultants, says: “One of the unexpected but welcome changes in the Budget was the announcement that the offshore limit for all insurance, retirement and savings funds will be harmonised at 45%, inclusive of the 10% African allowance. This implies that the current Regulation 28 offshore limit of 30% will increase to 35% with a further 10% in Africa outside South Africa. This will provide greater flexibility for retirement funds to access a wider set of opportunities for growth as well as diversification.

“The Minister also provided an update on the changes to Regulation 28 to enable greater investment in infrastructure by retirement funds with this expected to be gazetted into law by March.”

Casey Delport, investment analyst at Anchor Capital, says that, overall, the Budget was largely neutral but somewhat positive for bonds and the rand. “Investors will likely be pleased with deficits that are moderately smaller over the medium term than the consensus economist forecasts had expected, though they may still be concerned about downside risks to growth and the inevitable end to the current strong commodity cycle and what that will mean for tax revenues going forward.

“Furthermore, investors will be encouraged by the government’s continued rhetoric around its commitment to fiscal consolidation, wage bill curbs, disciplined support for state-owned enterprises, and permanent increases in social grants if accompanied by a sustainable funding plan.”