Ukraine and the Entrepreneur 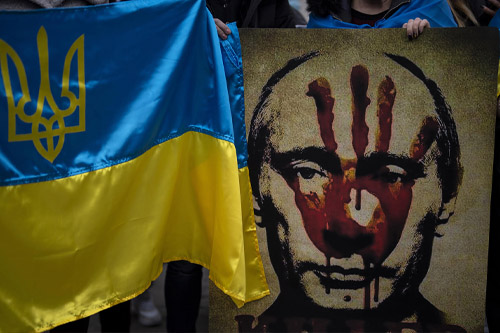 For the past four months or so Vladimir Putin and his forces are conducting a special military exercise in
the Ukraine. Putin’s stated objective was two-fold, firstly he wanted to protect the people in the Donbas
region and, secondly to stop the Ukraine from joining NATO. His opinion has been that Volodymyr
Zelenskyy is too friendly with Western countries and not friendly enough to Russia. It may appear a strange way to rush into your neighbour, guns ablaze, and telling your neighbour that he is not friendly enough? It may be a Russian mannerism – I would not know.

You may ask, Putin does not care a minute for the Russian people so why would he be concerned with the
people in the Donbas region? I don’t know the reason, but it does appear strange that he is going to have
a squabble of this nature over people that are simply an excuse to be a nuisance in the east of Ukraine.
What are the unintended consequences of this “Special Military Exercise”?

Firstly, Putin has single handily ruined that age old myth surrounding the invincibility of the big Russian
military bear. Ever since the Red Army stormed into Berlin and put an end to the Third Reich there has
been this idea among all nations that that the Red Army will put to the sword any nation who picks a fight
with the average Russian. Yes, we all know that the Red Army took a bit of blood nose in Afghanistan, but
many military specialists will hasten to tell you about the inhospitable terrain, lack of infrastructure and
the likes, but the idea of Russian invincibility remained intact.

As a side note it is quite strange that about twenty years or so, after the Russians finally withdrew the
Americans also decided to go and loose a ton of money and number of America’s finest in the mountains
of Afghanistan and then they too limped off home with their tail between their legs. I guess the Wall Street Journal will classify it as a draw, like the “tie” in Vietnam.

A much smaller country with an infinitely smaller military machine has humbled the mighty Russian bear
in the northwest of Ukraine. This is terrain which is like most of Europe and other countries that Putin has
bullied in the past. Sweden and Finland are not deterred by Putin’s threats and have applied to NATO
probably feeling that, militarily they could stand up to the Russian bear and they see more a panda bear
then a great big grizzly bear.

The second unintended consequence is that all military hardware manufacturers around the world now
get to test their weaponry on real live Russian targets. Its one thing to test your new laser guided missiles
on a shooting range where the target stands still, and all people are kept at a safe distance. Its quite
another thing to test the missile on a real live target who is trying his utmost to stay alive and not be blown to bits by your new toy. This is the perfect opportunity to make all those little adjustments and
modifications which will outwit the target who is bobbing and weaving and taking extreme measures not
to find themselves blown up. I suppose it’s a great selling point to potential customers when your weapon system has been tested in a real combat situation. I am not sure if thousands of conscripts in the Russian Military will be as pleased to know that they have unwittingly become a bunch of “crash test dummies”?

Thirdly, and probably the most curious of all, is that Putin’s biggest protest against the Ukraine was their
intention to be closer to NATO. Many countries who are part of NATO have pledged financial support and
delivered military weapons to the Ukraine. Other than sending in troops to the Ukraine, NATO has been
very active and open about their support. Effectively the Ukraine is now part of NATO.

Finally, Putin has lost the propaganda war in the west. There was a time that many international journalists would write articles and laud the new modern Russian leader who is keen on the outdoors and encourages the youth to build their bodies and minds. Now Putin is seen as a villain in any part of the world where he does not strictly control the media. Someone should remind Putin that the only “thing” you take to your grave one day is your reputation. None of your worldly possessions will follow you to the afterlife. You go out the way you were born except that now people have the opportunity now to discuss what kind of a person you were. The more famous you are the longer people will talk about you and consequently the more infamous you are the longer people will talk about you in a poor light. Take Hitler as an example, I don’t think anyone has ever sat back a reminisced about the good old days with Hitler frolicking around the Bavarian Alps. So, I think Putin will be rather affectionately referred to as Bad Vlad than the new dynamic Russian leader who made modern Russia an innovator to awe inspire the new generation.

I think that Putin himself would agree that these unintended consequences are not that rosy for the
Russian cause.

I am sure that, you the reader, must be saying that I should stick to my knitting, as I am not a political
editor. You would be correct as I don’t really understand geopolitics and quite frankly am not really that
interested in who is going to win the mayoral election in Bombay. I do believe in looking at people’s
behaviour and making sure that entrepreneurs don’t fall into the same traps as seeing an entrepreneur
go insolvent is something that I really hate as that entrepreneur has no doubt poured his heart and soul
into his business and watching that simply wash away is heart-wrenching.

So, what can be learnt from this from an entrepreneurial perspective?

The first thing is to always think about the consequences of your decisions. It is reasonable to believe that
every decision you make for a positive outcome for yourself. That outcome is very understandable as it is
the very reason why you have made that decision, however, try to understand all the possible negative
outcomes of your decision, then perhaps decide on proactive actions one can begin with in order to
mitigate the risks.

To summarise Mr Putin’s unintended consequences of his military campaign as follows:

Let’s take an example of an everyday decision we entrepreneurs make.

Do I employ this administrative person? The positive outcome would realistically be that the person will
free up time and provide the entrepreneur with support and information to help better run the business
and make more profits.

In context to what we have learnt from Mr Putin. If the person is poor and does not perform as planned,
then:

The point being that if we identify the risks in advance, we can then logically take proactive steps to ensure that the administrative assistant is of the best quality. We could do skills tests, background checks, reference checks and other preventive measures to mitigate the risks.

These steps could naturally be considered on every decision we as entrepreneurs make on a daily basis.
Remember chase the business and the money will take care of itself. If you chase the money, you probably won’t get either.

Facebook
Twitter
Pinterest
LinkedIn
PrevPreviousTax season will be shorter this year
NextFeeling short-changed by SARS? What you need to know about auto-assessments and how to get amendmentsNext
On Key